It interprets CAN-Bus messages and tells the accessories connected to it how to behave.

Very easy! The HEX ezCAN was designed with biking enthusiasts in mind. Installation does not require expert knowledge or special tools, and the few basic steps are clearly set out. Accessories are simply plugged in, and the battery wires connected – it really is as straightforward as it sounds. You configure your accessories using simple software via a USB connection.

Your warranty is not voided because you do not cut, or tap into, any wires.

On all four connectors the black wire, wire number 2 is the negative ground wire and the coloured wires (red, orange, yellow and white) are the positive wires. 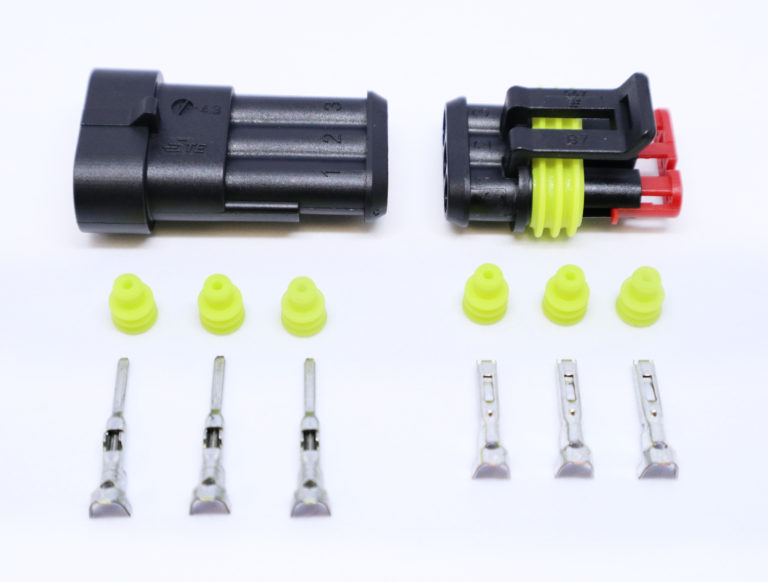 For ezCAN units with 3-wire connectors:

For ezCAN units with 2-wire connectors (note that you may experience flicker at low intensity settings):

There are multiple ways of connecting your Admore light to the ezCAN. To make full use of the features of the Admore light connect the wires and configure the ezCAN as follows:

Yes, you can.  We have evaluated and tested a set of Clearwater Krista lights using an Accelerated Ageing Test which is equivalent to 7+ years worth of riding (see the details of our evaluation and test below). We believe that the Clearwater lights will work reliably with the HEX ezCAN.

Unfortunately we have been getting reports that Clearwater Lights has been telling their customers that their lights should not be used in conjunction with an ezCAN as it would seem to be working initially, but then eventually the ezCAN would cause their lights to fail.

Why do LED lights fail?
Failure of electronic components is a reality. Assuming that the LEDs are supplied with the correct voltage and not over-driven, the two most common reasons for failure are the use of inferior components or an inferior design that unnecessarily stresses the electronic components to the point of eventual failure. Very typical are failures of the power capacitors that have to deal with the continuous inrush and ripple currents.

We have a set of Kristas and have evaluated the Clearwater Lights design. They manufacture very high quality lights which are well respected in the biking community and we saw no trace of the use of inferior components.

The opinion of a specialist
We contacted one of the LT Field Application Engineers and ran this by him, his response was: “I agree with you, there is no issue with these parts.  They are designed to work in a switching environment and it does not matter how you switch them as long as the forward or reverse breakdown voltage ratings of them are not exceeded.  They are diodes afterall so pretty resilient.  There can be voltage spikes when switching, due to inductive parasitics etc which could overvoltage them but that’s an OV problem, not a susceptibility to switching problem.”

We designed a Test
What we did was to set up an Accelerated Ageing Test. The average mileage seems to be around 2500km/year. In order to work with a worst case scenario, we used 10,000km. Then we made an assumption of the speed that the rider averages over those 10,000km and we chose 60km/h. That means after 7 days of continuous use that would equate to the same ON-time of a bike that did 10,000km travelling at an average speed of 60km/h. Now leave them ON for 35 days and you have an accelerated test that equates to 5 years worth of “normal” use.

We hear you saying but I ride more or less than that and my average speed is X. Well, now that you know how we calculated it, just plug in your own numbers – if you drive only 5,000km in a year, then this test equates to you using your lights for 10 years!

Naturally you need to pay good attention to the conditions too. Like any good LED light, the Clearwater lights have temperature compensation. That means the lights will decrease their current draw in order to minimise the power dissipation. In order to create the worst case scenario test, we need to run the lights for the duration of the complete test and the maximum power dissipation. How do we do that? We set the ezCAN brightness to 90% (100% would not have any switching) and then we introduce just the right amount of airflow to keep the lights cooled to remain working at their maximum power level (and we monitor this at a at least twice daily during the test).

The Test results
The lights passed the 5-year Accelerated Ageing Test with flying colours! As a matter of fact, we left the test running, and at the time of this writing they were working perfectly after 1000+ continuous hours of being powered by the HEX ezCAN, which equates to over 7+ years in the Accelerated Ageing Test.

To conclude we have explained why technically the HEX ezCAN can be used with Clearwater Lights.

GET A FREE QUOTE

Please fill this for and we'll get back to you as soon as possible!